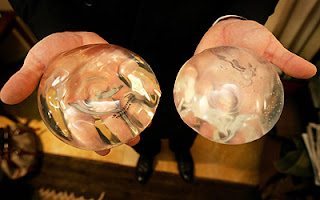 Just when you thought you’d heard it all, here’s a new one for you.

In the current Isaacson v. Isaacson case brewing in North Dakota, Erik Isaacson is claiming that the value of his ex-wife Traci’s $5,500 breast implants should count as a mutual asset. And get this: he’s saying the same for her $1,000 lasik eye surgery.

(Why do I get the funny feeling that someone cheated on someone else here..?)

So how did the judge react?

“Absolutely nonsense. I can’t imagine people would actually waste time thinking that breast implants are marital assets. It just defies common sense. I don’t know how you would expect me to award breast implants, if you want me to have them cut out and given to Mr. Isaacson,” said South Central District of North Dakota Judge Robert Wefald.

During proceedings last week, Justice Daniel Crothers asked Isaacson’s attorney, “Do we have any lines to be drawn? Is a hip replacement a marital asset?”

In return, Isaacson’s attorney argued that medical expenses should be considered marital assets when they are “clearly cosmetic, elective, non-necessary.”

I think these folks need to pack their bags and head over to Judge Judy.

What do you think?