In a dramatic five million dollar lawsuit filed by Maria Alaimo of Staten Island, the 47 year-old patient accuses her plastic surgeon  (Dr. Keith Berman) of implanting her with “four breasts.”

But put the brakes on that freaky visual that just popped into your head!

What Maria is actually referring to is a breast augmentation complication called “double bubble.”

Double bubble happens when an implant falls down BEHIND the fold of the breast instead of forward INTO the breast. As a result, the breast ends up with two folds that make it look like one breast is stacked on top of the other.

You might need to read that again to really “get” what I mean about how it’s caused.

Here’s a photo set to illustrate what I mean. Note that this IS NOT Maria Alaimo – it’s a patient of Mountlake Terrace, Washington Plastic Surgeon Dr. Richard A. Baxter. The top set shows the double bubble, and the bottom set shows Dr. Baxter’s amazing post-corrective surgery: 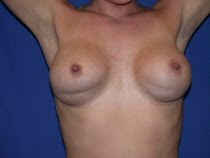 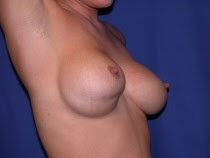 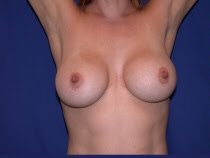 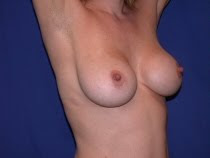 Photos: http://www.implantinfo.com/
Now back to the lawsuit.
Maria had the first failed boob job in 2003, and she claims that two corrective attempts by Dr. Berman left her no better off – with breasts that “appear flattened on the bottom with severe swells the size of a softball on top,” causing her to suffer from “pain, disability, loss of self-esteem, humiliation and embarrassment,” – as reported by consumerist.com.
But that isn’t all.
Maria is also blaming her divorce on the failed surgeries, saying that she could no longer be intimate with her husband after her disfiguring surgery.
Interestingly enough, the lawsuit states that she paid $2,999 for the breast augmentation in 2003, plus a $500 referral fee. That’s such an eyebrow-lifting bargain basement price, that I would have immediately questioned why the steep discount; breast augmentations in the New York area average about $7,000-$9,000.
But a search on the American Board of Plastic Surgeons website shows that Dr. Spencer was board-certified for the first time in 1999 (4 years before Maria’s surgery), and was just re-tested and passed board certification again in December of this past 2009.
So is this a case of a hysterical patient who may not be revealing the whole story behind her complications? Or is it a case of poor plastic surgeon skills?
It’s impossible to tell with only the little sensational nuggets the public has of the story. It doesn’t seem right that three surgeries later, Maria’s breasts are still not fixed – but it’s also pretty ridiculous that this woman seriously thinks a breast augmentation is the sole reason her marriage ended. (That’s what she states in court documents.)
But I can’t leave you without a moral to this tale of woe!
If you have very saggy breasts, your risk of double bubble is higher.

Be sure to ask your plastic surgeon if double bubble is something you should be concerned about. Most often, a lift to remove the excess saggy skin when you get your breast augmentation can all but eliminate the risk of this complication, if you’ve hired a skilled and properly credentialed surgeon.